Home/Flying Adventures/'08 Coast to Coast by Rans S7 Print This Page
Coast to Coast Australia by Rans S7
Ready to leave Kilcoy airfield, with a tailwind showing.  Kilcoy is about an hour northwest of Brisbane, Queensland, right on the east coast of the country. Intensive farming country on the coastal plain.  That will soon change inland..... Parked at Milparinka Pub.  This is an old gold mining ghost town.    http://www.walkabout.com.au/locations/NSWMilparinka.shtml
Land on the airstrip and taxi right up to the fuel pumps at the pub. Arkaroola airstrip.  Note the taxiway markers, left overs from lots of mining activity in the area.
I landed here because the fuel tanks weren't feeding evenly - one was almost empty and the other one half, and rugged mountains ahead weren't the place to test if it would come good.....  It turned out to be a very interesting place to visit. Arkaroola Resort and Wildlife Sanctuary.  Note the astronomical observatory behind.
I'll be back to see more of the sights and learn more of the geology, palaeontology and astronomy that they display here, and go hiking in those mountains.  www.arkaroola.com.au
VERY Aircraft Friendly.  A great place for a fly-in visit!
Just give an call on 126.7  while you're still above 3000ft (below that the signal is blocked.)
Avgas and premium unleaded fuel available.
Wild geology of the Flinders Ranges, with sedimentary in the foreground and igneous beyond.
http://en.wikipedia.org/wiki/Flinders_Ranges Beverley Uranium Mine.  No digging - they pump a mild acid down to dissolve the ore and then up another hole and extract the uranium.  http://www.science.uts.edu.au/news/2004/uranium.html
Marree, with Drover's Rest campground in foreground.  This used to be the railhead, and camels carried the goods to outlying settlements.  Drovers walked the cattle down the Birsdville Track from Queensland to be loaded on the rail here.
http://www.southaustralianhistory.com.au/marree.htm  http://www.southaustralianhistory.com.au/birdsvil.htm

A unique 'art installation' west of Marree.  I believe the story is, that a bored construction crew working in the area somehow got hold of these old aircraft and 'planted' them like this..... Another bit of fun right nearby.  The bus body is sitting on a disused rail brige over that gulley.
That fin really adds the finishing touch!
The 'Ghan' is the name of the old rail line, named after the Afghans who used to handle the camels - they were the truckers of their day.  http://en.wikipedia.org/wiki/The_Ghan Our bit of 'painted' desert. The colourful tailings ponds from the uranium processing plant.  Looks pretty, but it's probably pretty toxic..... Landed out back of Glendambo Roadhouse (truckstop).  It got too narrow to taxi any further, then a roo shooter came along and drove me in to get fuel and a burger.
Maralinga airstrip, a very welcome island in all that remote 'tiger' country.....
The airstrip is 2.4 km (7800 ft) long.  Built in the 1950's for access by British transports and bombers to supply the nuclear bomb testing facility established way out here.
Note - This a restricted area, and permission is required to enter.
Tied down on that enormous apron.  That entire area is carefully graded so that any rainwater drains into a dam and is pumped into large tanks.  Not much rain out here, but occasional storms, and 4mm is enough to start a significant flow. This pure bred dingo was raised here from a pup, and sometimes comes back to visit. Wild camels hang around for the water in the dam.

Self-explanitory, and the reason this establishment was built here in the first place.  It's a restricted area at present, but luckily I had a contact who got me in to see all this fascinating stuff.  The land is in the process of being turned over to the Maralinga Tjarutja Trust for the aboriginals to manage, and they plan to set it up as a tourist site.  I hope it can happen, because it's really a fascinating place, and an ideal fly-in site. A bomb site all laid out for a test, but the moratorium on atmospheric testing came into effect before it was used.
A bomb site that was used for a test.  In the 1990's they came back and cleaned up the contamination. The topsoil was scraped off the effected areas and buried in deep pits with sealed caps over them.  Even the heavy equipment that was used was buried afterwards. The clean-up after one of the 'minor trials'.  These  so-called 'minor trials' were the worst polluters of the lot.  They weren't nuclear blasts, but were 'dirty bombs', uranium and plutonium spread by TNT explosions.  Deliberately contaminating an area for hundreds of years with plutonium really sucks.....  And this was the British government, not a looney terrorist.....  http://en.wikipedia.org/wiki/British_nuclear_tests_at_Maralinga A 'Fogbow' - early morning fog with the sun at just the right angle.  (That's not me, it's Steve, the present caretaker of the site) 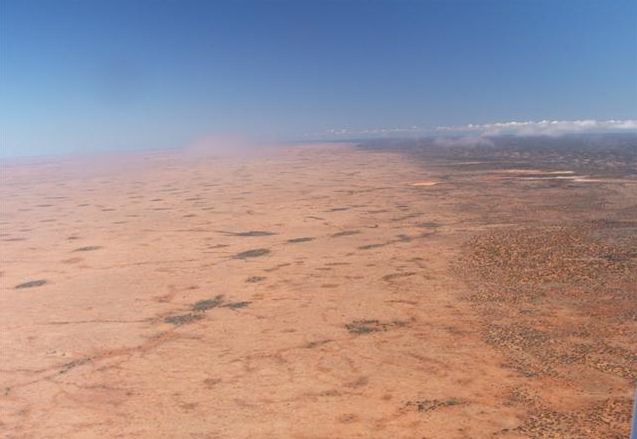 Part of the longest straight rail line in the world - 487 km (300 miles).
http://en.wikipedia.org/wiki/Indian_Pacific A freight train crossing the Nullarbor. Sheep grazing to the right of the fence line.  Sure takes toll on this fragile country.... The 'Super Pit' gold mine at Kalgoorlie, right next to the city.  http://en.wikipedia.org/wiki/Super_Pit_gold_mine The pipeline that carries water all the way from the coast 530 km (330 miles) to supply Kalgoorlie.
Claimed to be the longest water main in the world.
http://en.wikipedia.org/wiki/Goldfields_Water_Supply_Scheme Safe and sound to the new owner at Serpentine airfield near Perth, Western Australia.
2000 nm (3700 km, 2300 miles) in 5 days.  A great little aircraft for cross-country travel!